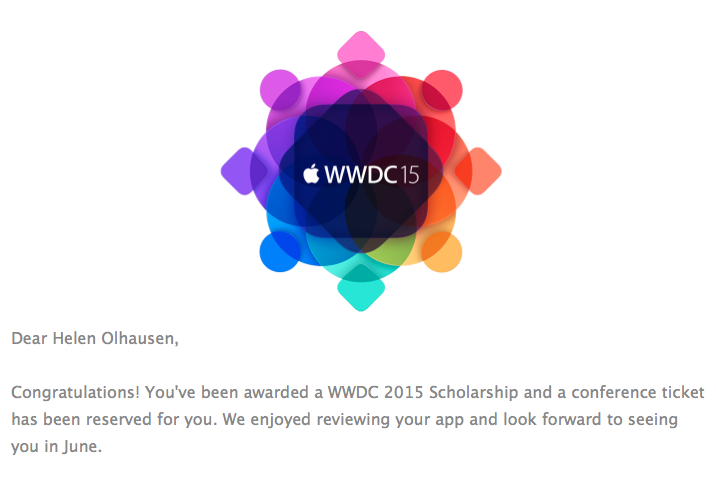 I know a lot of time has passed since the last WWDC, but still, I wanted to share my first WWDC experience. Hope you like it.

If you are an iOS lover and specially a developer I guess you’ve wondered about the WWDC at least once. This year someone suggested I should go and BOOM!! The idea of being there got stuck in my head! I tried the lottery but couldn’t get in. The only thing remaining was Apple’s scholarship, so I applied! 3 days before the deadline I started developing my app, and…what happened? I WON!! AHHHHH!! I still remember the moment I got the email from Apple saying You've won a WWDC 2015 Scholarship it was amazing!! I couldn’t believe how lucky and honored I was!

I arrived in San Francisco on Friday afternoon, it was my first time at the US so getting to stay in a city like that made the experience even more incredible. My first WWDC day started the following Sunday after picking up my conference badge and jacket, with the cool swift code tag! 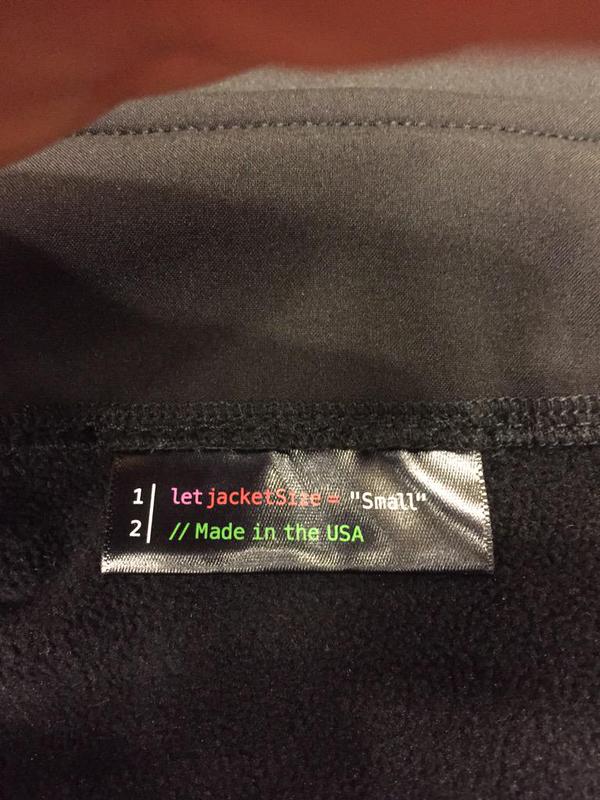 On Sunday we were invited to a special orientation. The place was awesome, there were Apple engineers everywhere, hearing the story of a UIKit engineer on making his first commit to the project was amazing. We had the most inspiring talks. One of them hitted me like no other did in my life (really!). This guy talked about Technology, Liberal arts and how Apple as a company is a life image of that mix. As a tech person and musician myself, hearing what he had to say was really moving. He said that we were born with a fundamental life skill, that is programming, but what should really move us, is our passion, our heart, and in my case, my music. 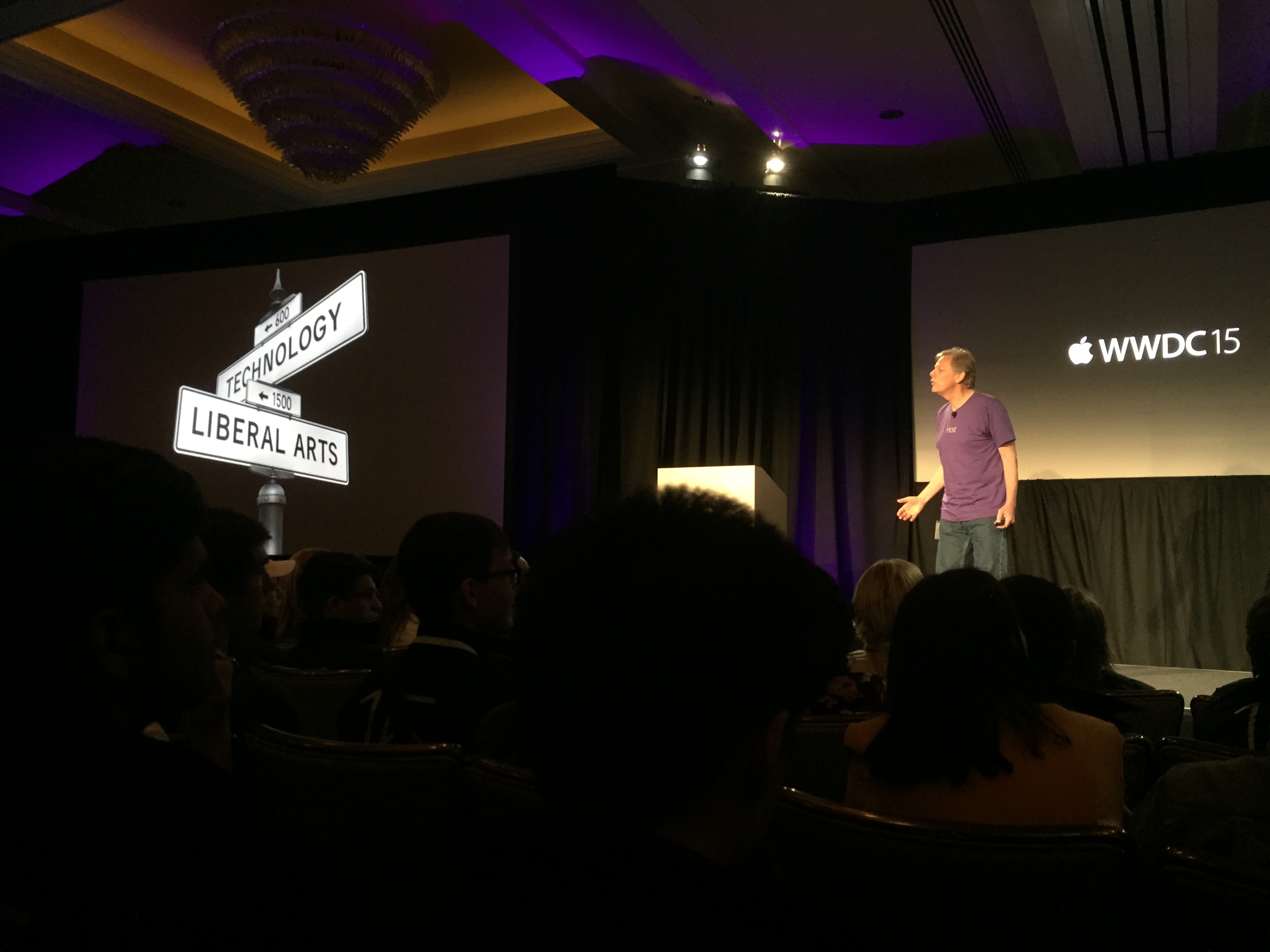 We are a technology company that is almost as disinterested in technology as any other place I've ever been... The technology we are interested in?... we connect human being to human being [full stop].. We happened to use technology to do it... and we are so delight that we find some other folks who have the same attraction. 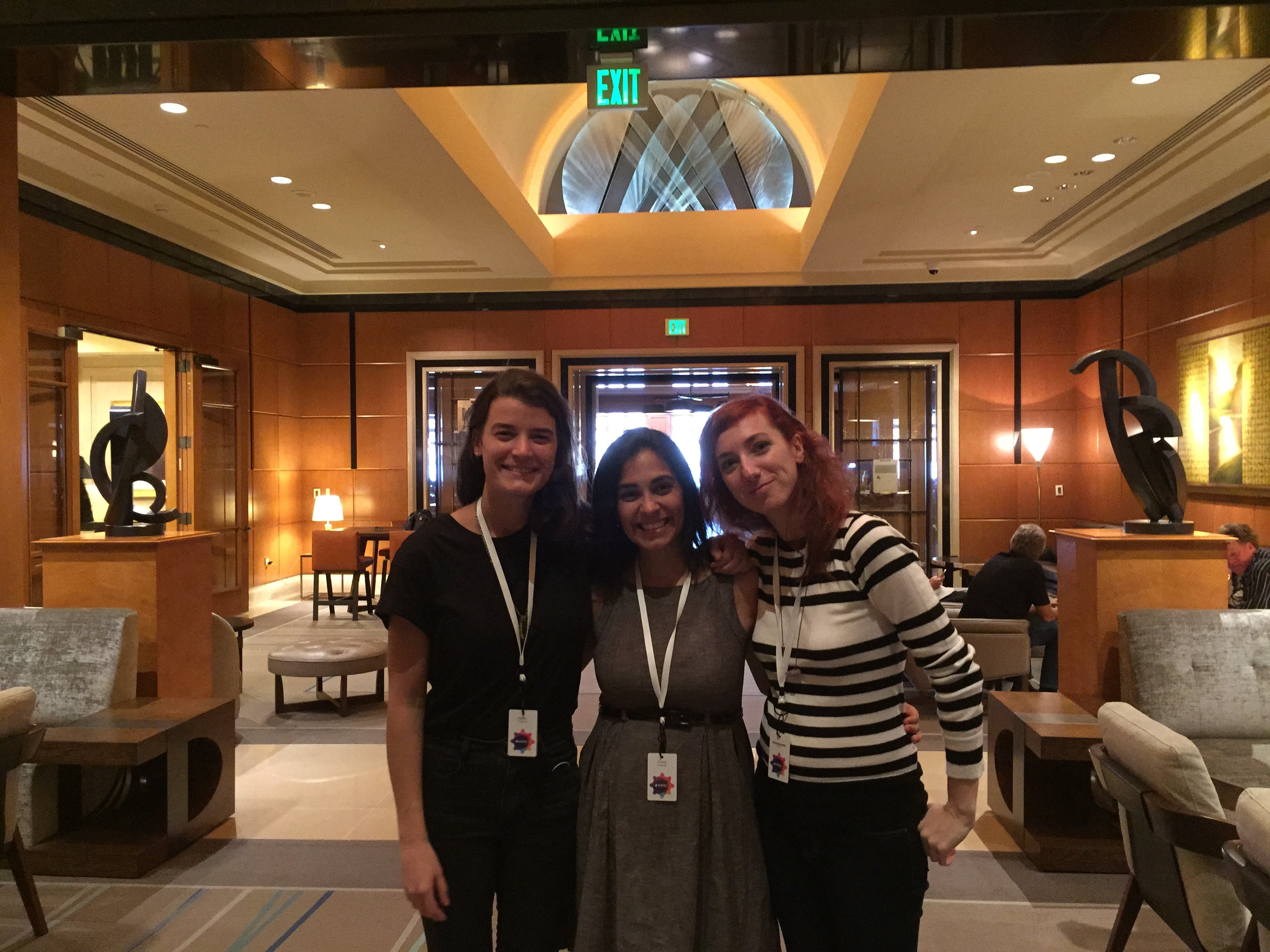 Vanessa and Gina, two other scholarship winners, with whom I spent the rest of my WWDC. 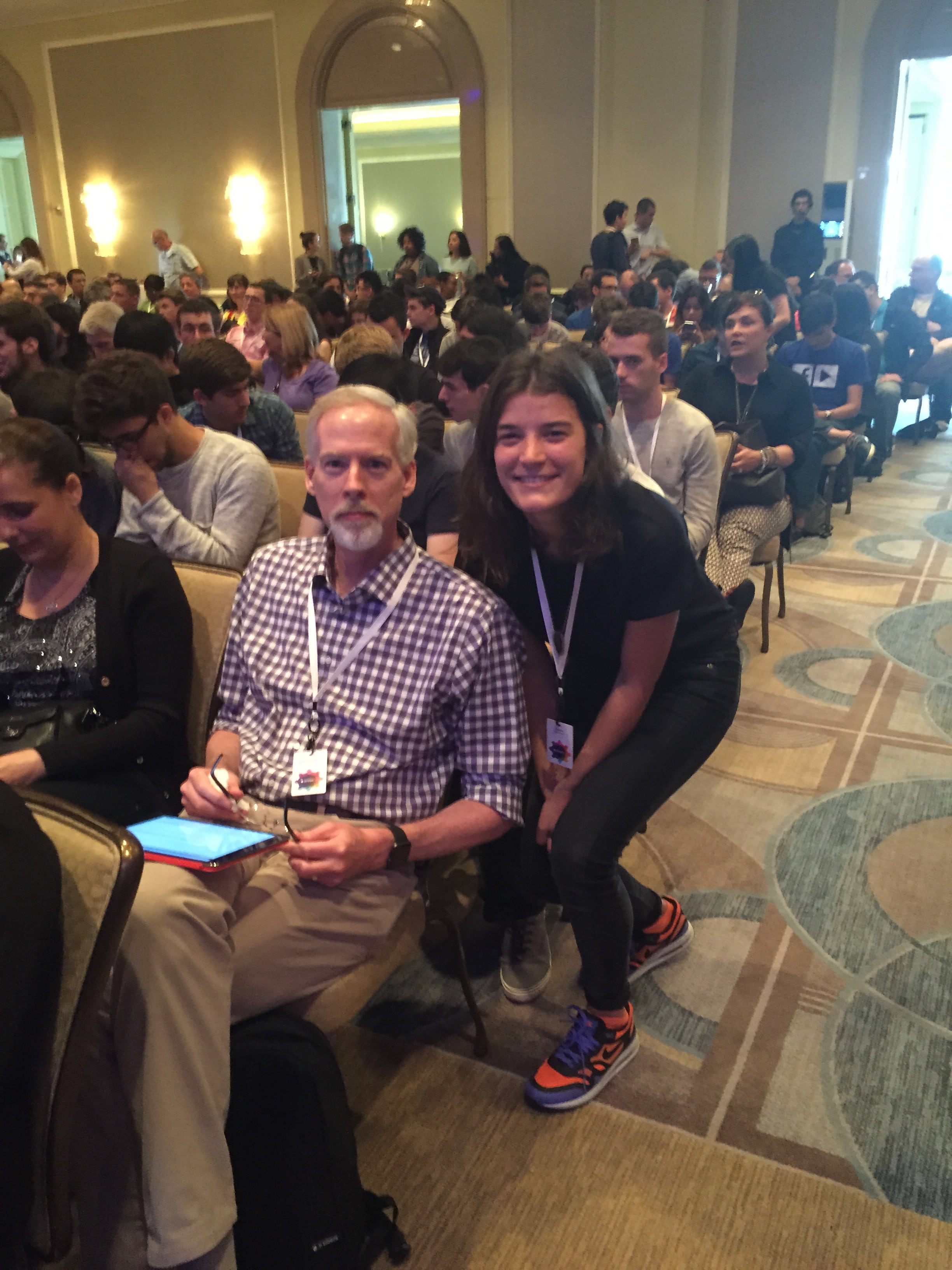 That day I also met the great Paul Hegarty. He was my first iOS teacher, when I started learning iOS through his Stanford videos. 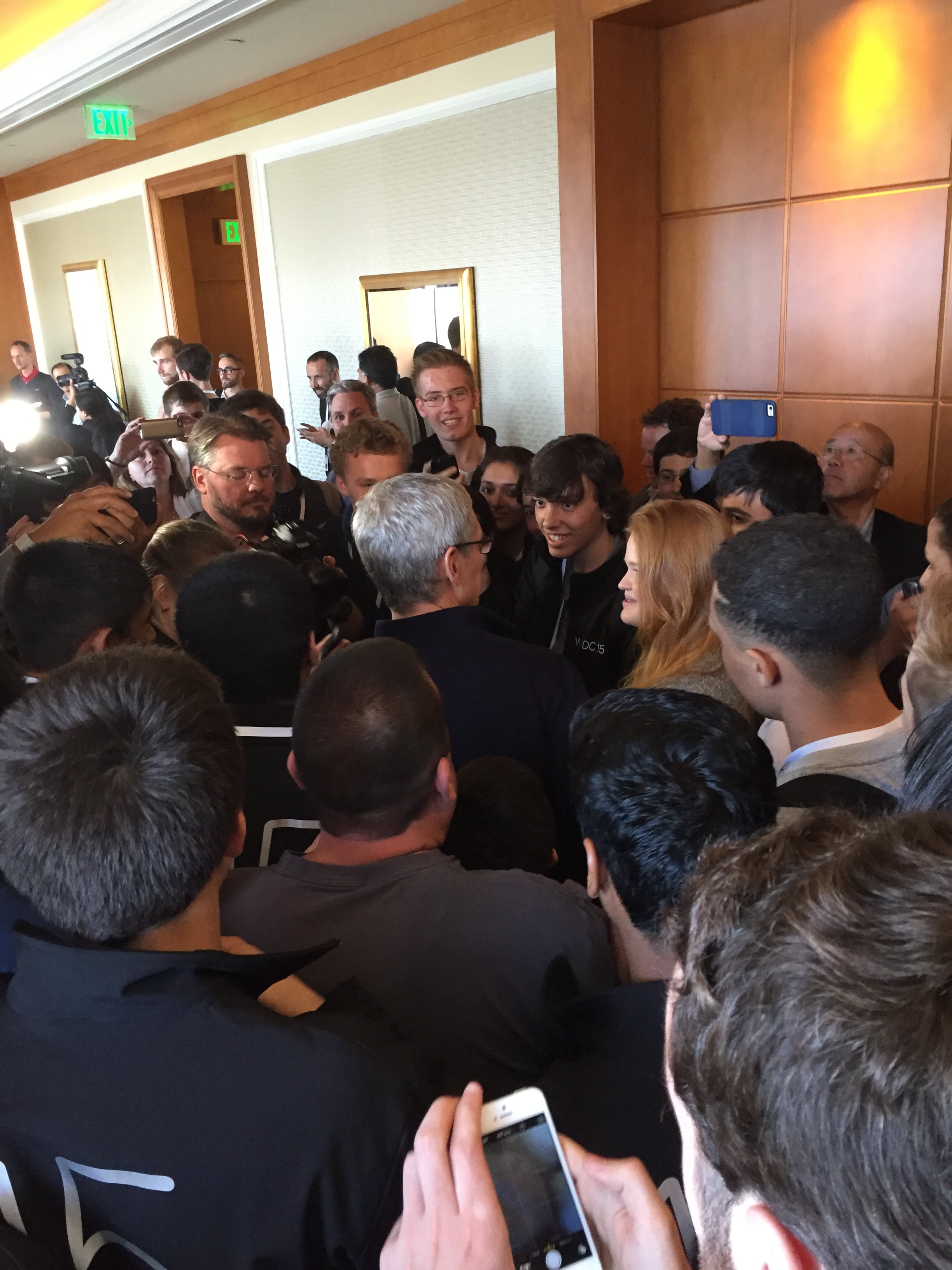 Even Tim Cook showed up. That morning was full of surprises and awesome feelings. I left the place with new friends, new horizons, new ideas, so excited to see what's next!

So as my first day went by, it was just a matter of time to get even more anxious for The Keynote. At around 7 a.m, you start going into the Moscone. Once inside, you go through very long queues to get to the Presidio, which keeps raising your excitement level, and when you get to the third floor people start running, that moment was epic! haha 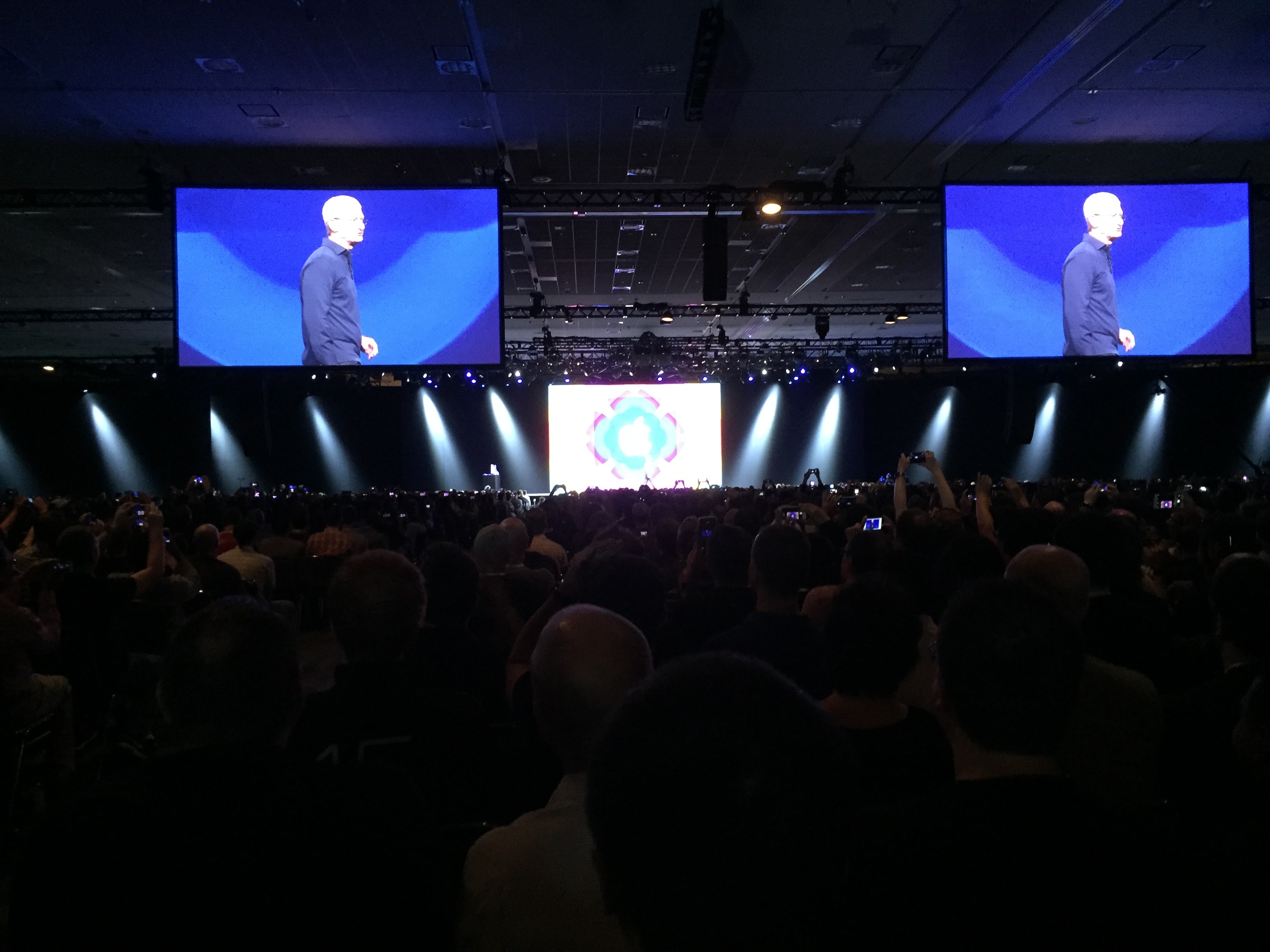 The whole presentation was awesome, they managed to keep people exited, from the opening movie, over the El Capitan preview, to the new iPad multitasking features and the Apple Watch advancements, ending with the introuction of Apple Music, which was for me, as a musician the best part. So the week started, everyday I checked which sessions I'd attend, you’ve probably watched some of them, but it’s nothing like seeing them live, feeling people's reactions to new features and enhancements; You suddenly find yourself standing up cheering when they introduce something jaja. But not all the fun is in the sessions, there is much happening when the sessions are over, sometimes those are more important, than being at a session which you can watch later.

The side events are awesome, you meet all kind of people, those who inspire you, those who make you grow as a developer, people you admire, that you have use their open source libraries, those who makes you want to go back home and create new and awesome apps, for me this was the most enriching part of the week. During the WWDC week San Francisco is full of tech people. Bars, restaurants, everywhere you go there will be a side event, party or meetup, whatever excuse to get together. But the halls of Moscone are still an amazing place for social interaction, moreover having the opportunity to be at the scholarship lounge, a special place they setted up for scholars, there I met the coolest people and inspiring, there is were I made my friends with whom I still talk today. 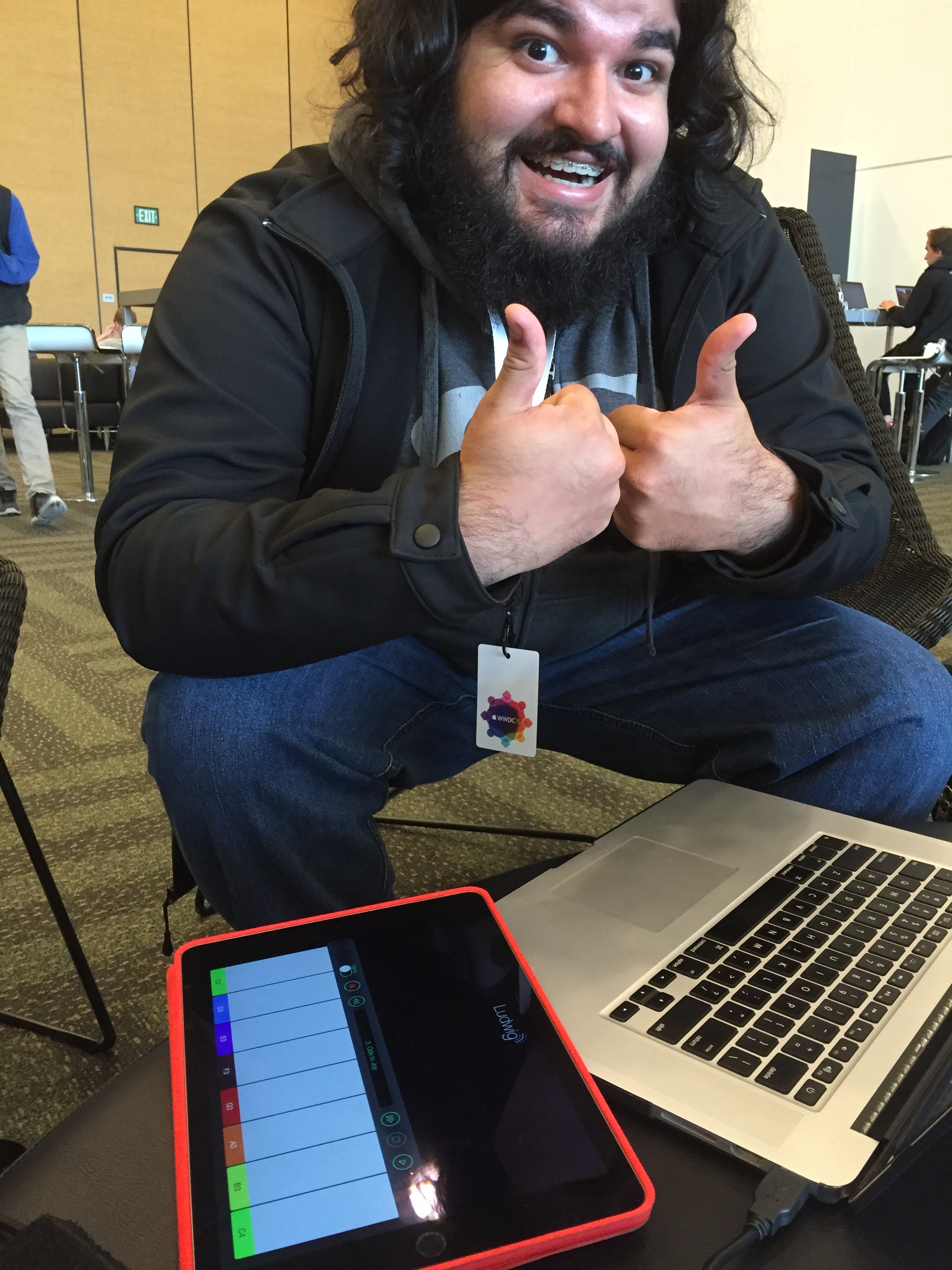 Raphael with his Ludwig Project, his app brings music to everyone with passion and equality, I met him in the scholarship lounge.

But sessions are not all. The labs! my first experience in the labs was amazing I was able to debug my swift code side by side with one of the Swift engineers, he gave me tips, he knew where to put breakpoints in my code, and we even discussed my code! and if something goes wrong they even recognize their own mistakes, that shows the humanity behind the framework we use everyday and the respect we should have for them.

As the week was reaching its end, there was the bash party, that day I met Craig Federighi. I remember walking on the scholarship lounge and suddenly crossing him, I freezed and the realized it was him! the guy it's just great, very humble, it was great to meet him. 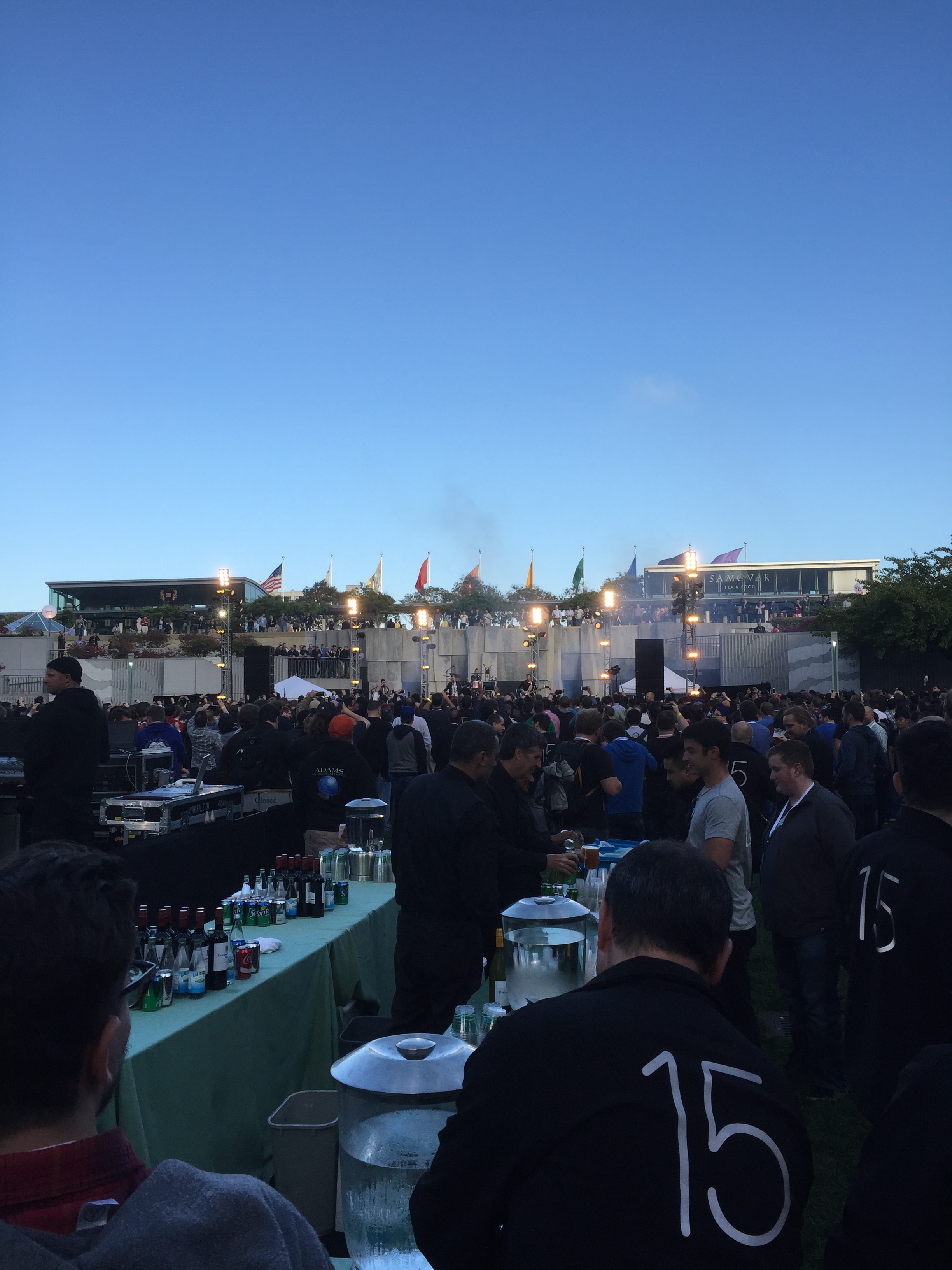 I think I wrote a lot just for one post, maybe next time I can tell more stories :) But I'm missing a very important thing:

Ah! Here is my WWDC app I am a passionate musician and singer/songwriter, so I mixed my "talents" to make an app about this, which I ended up doing it in three day. I integrated soundcloud's public API using AFNetworking to get my tracks and the info related to them. For the UI, I used cocoapods to integrate the beautiful XLPagerTabStrip. I coded in both `objc` and `swift` and added some cool writing about myself and a little game with the scrolling. 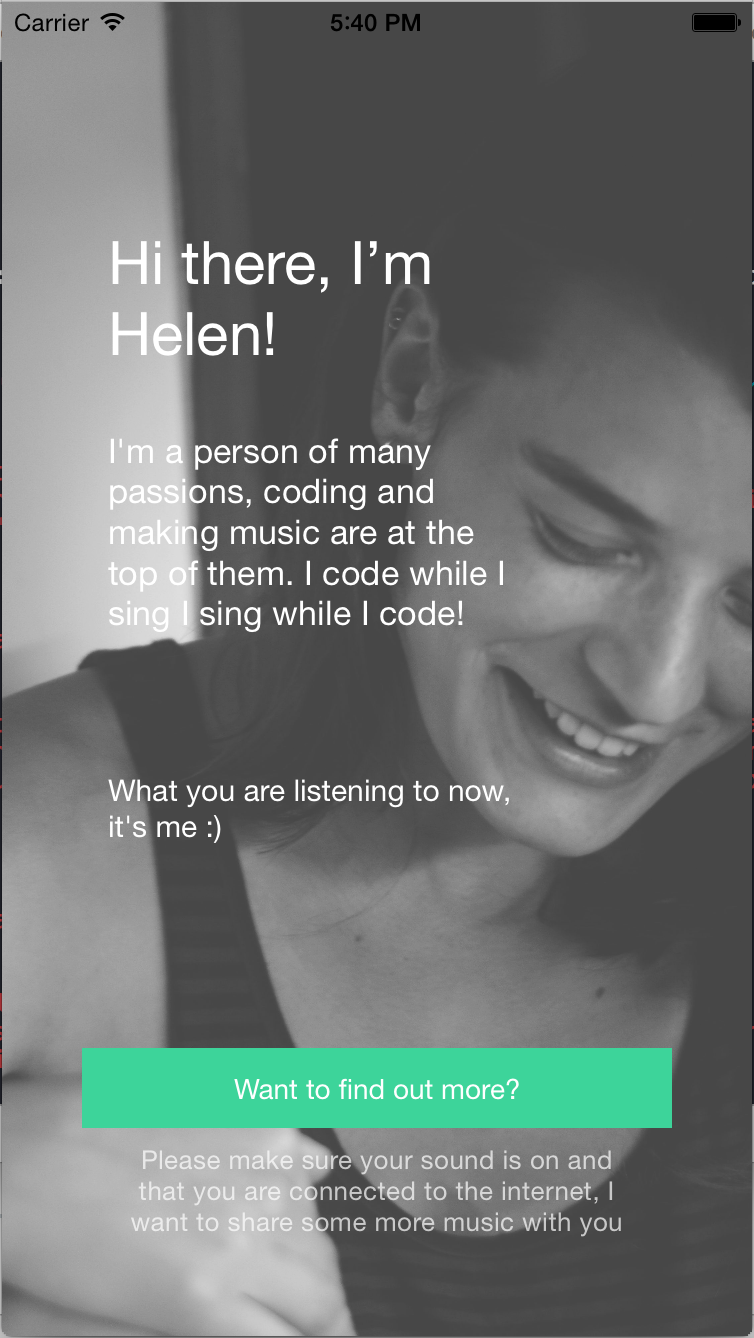 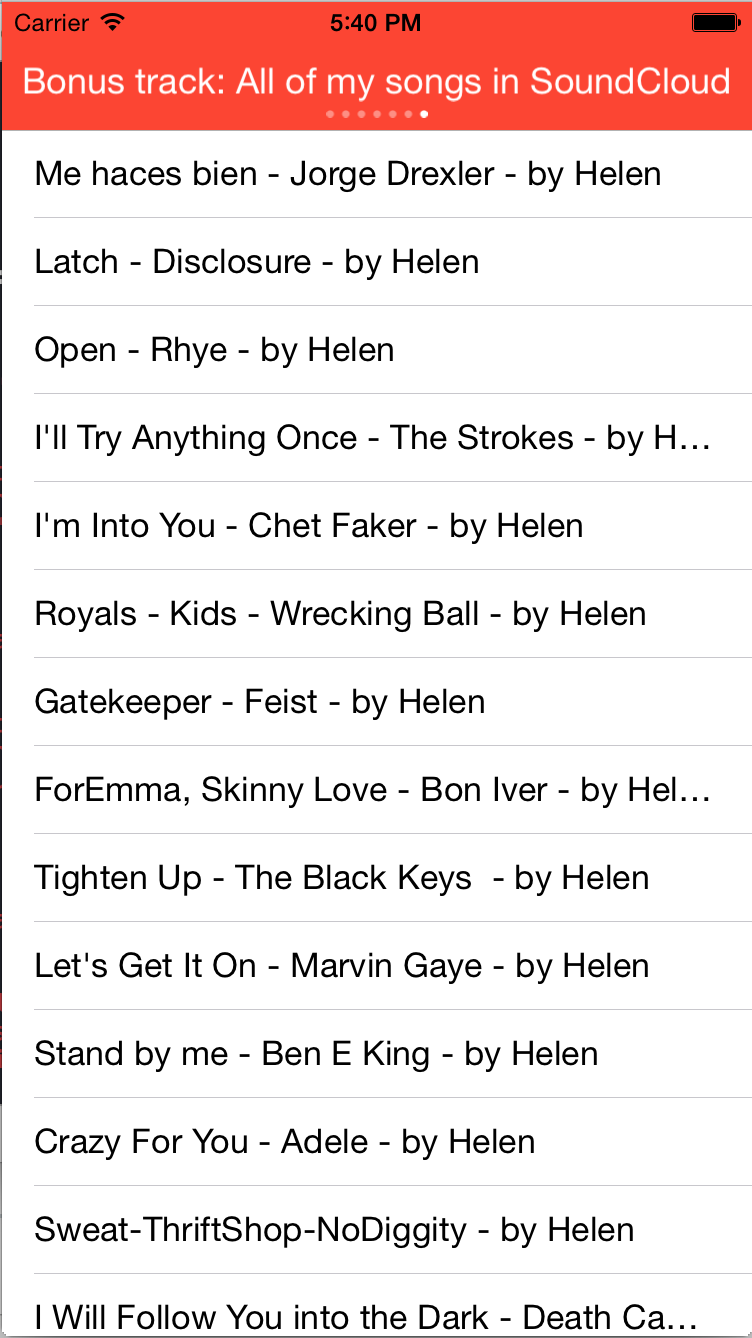 You can find the full source code

And this is my soundcloud account if you want to listen to some music :)


Apple's WWDC it's an experience you must live once. It is the beating heart of Apple's year and a place that will make you grow in all senses. If you don't get into the lottery, apply for the scholarship! Get into that thrilling experience, make your own app, show to the world what makes you special, I'm pretty sure Apple will be delighted to have you in it's WWDC!