CI and automatic deployment to iTunes Connect with Xcode Server

In this post I’m going to write about my experience and the problems I faced when setting up Xcode Server for CI and automatic deployment to iTunes Connect at Xmartlabs. I’m going to let you know how I could solve some problems hoping it may help somebody in the same situation.

There are a lot of blogs that explain how to set up Xcode Server, create an integration bot, and explore the results on Xcode (issue tracking, tests code coverage, etc). However, when you try to make something more sophisticated, you may encounter some errors and it will be difficult to find resources for a solution.

Why did we have our own CI server?

Well, almost everybody knows the benefits of having a CI server; it can automatically analyze code, run unit and UI tests, build your project among some other valuable task. If something goes wrong, it will notify the results to people that may have introduced the issue. Xcode bot tracks all new issues of each integration as well as solved ones. For new issues, the bot will display a range of commits where the issue may have introduced. Moreover, we no longer need to deal with deployment provisioning profiles and certificates allowing anyone on the team to easily release a new version of the app.

In short, this allows the programmer to spend more time on app development and less on app integration and deployment. Meanwhile it ensures the code has certain minimum quality level.

The guide Xcode Server and Continuous Integration Guide from Apple will give you a good introduction on how to setup and use Xcode Server. We recommend that you read the guide first because we are not going too deep into the basics of setting up Xcode Server.

Once we have installed the Server app and enabled Xcode service, we have to install Cocoapods and Fastlane. Fastlane will help us with many common tasks that are necessary for building a project and uploading the app to iTunes Connect. To prevent permissions issues we will install all the gems only for the builder user using gem install --user-install some_gem. Additionally we need to create a symlink to access the Cocoapods and Fastlane binaries in order to access them when our bot is running.

Before starting, include the ruby bin folder to builder’s path by adding the line below to the files ~/.bashrc and ~/.bash_login:

Since we use a Gmail account to send emails, we had to change the settings on the Mail service on Server app. First enable the Mail service on Server. Then check the option Relay outgoing mail through ISP. On the Relay option dialog you have to put smtp.gmail.com:587 in Outgoing Mail Relay, enable authentication and enter valid credentials. That’s all you have to set up for your Server to send the email using your Gmail account. 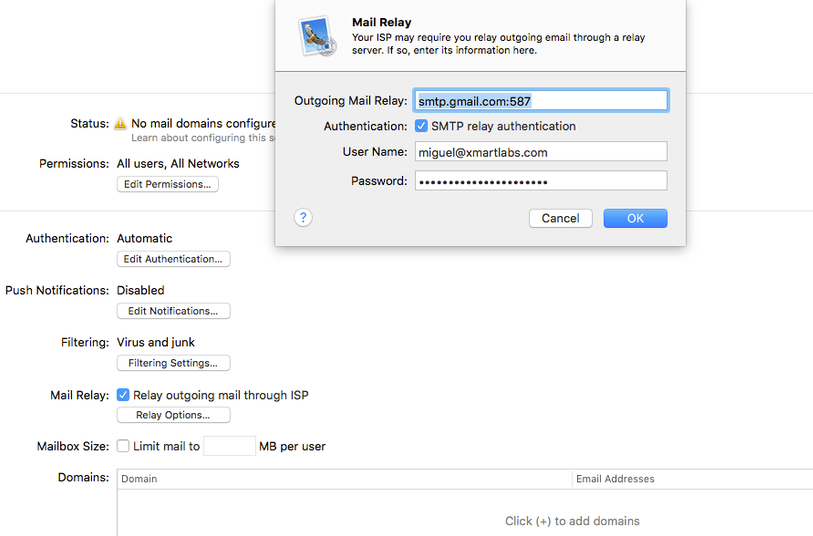 Now that we have our Xcode server up and running, it’s time to create our Xcode bots. At Xmartlabs, we set up two different bots for each Xcode project.

Indented to make sure the project builds properly and code analysis, Unit & UI tests pass accordingly. This bot is triggered automatically each time a pull request is merged into develop branch. Committers will be notified if something goes wrong.

We can create the bot by following these simple steps: 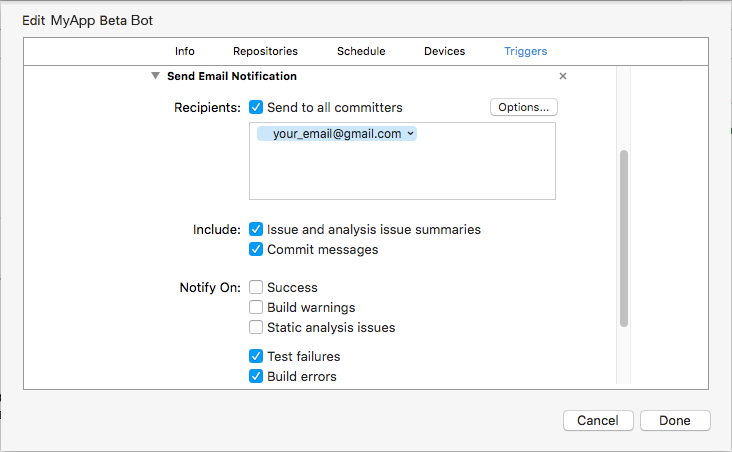 Something cool is that the email will be sent to all committers that may have introduced the issue and you can specify additional receivers.

The second bot is in charge of building and uploading the app IPA to iTunes Connect. It will also be responsible for creating and pushing a new git tag using the most recent code base. We’re going to use Fastlane to achieve this.

Normally we configure it to run on demand or weekly schedules since we usually need to release beta versions once a week. 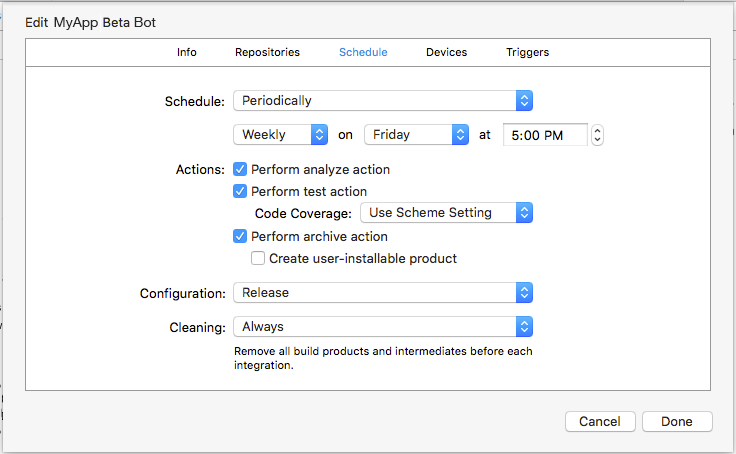 We have to ensure that distribution/development certificates and their associated private key are installed on the System Keychain. 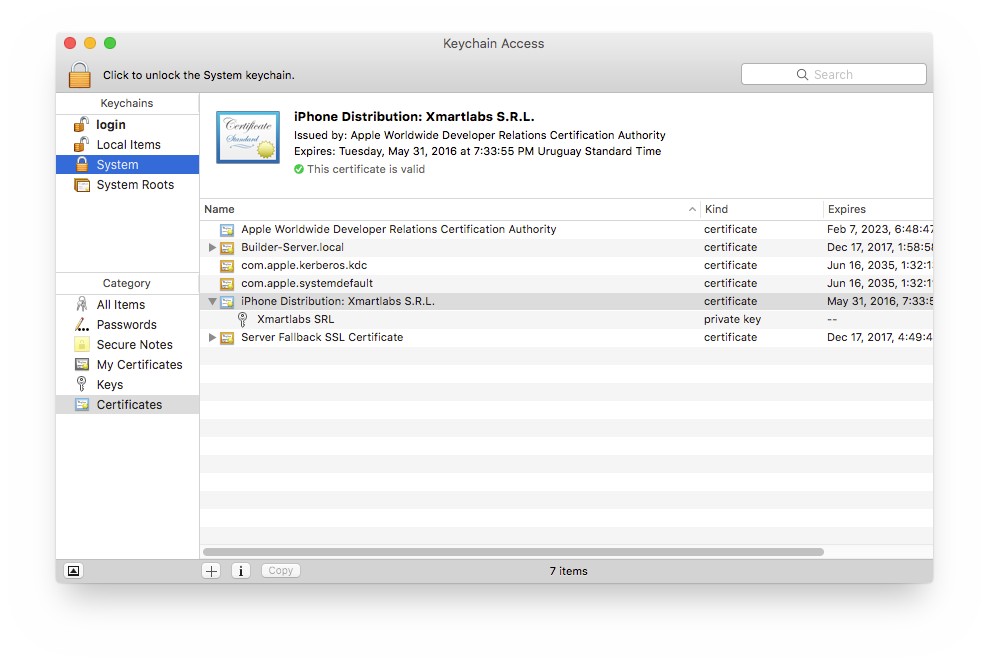 Before our Deployer Bot starts integrating, we have to perform some tasks which will be run from a triggered command:

Fastlane tools will look for useful information at Appfile file to deploy the lanes such as Apple ID and application Bundle Identifier. Code snippet below illustrates how Appfile could looks like:

Downloading and configuring provisioning profiles is done by Fastlane sigh tool. Its usage is really straightforward, just set up the Appfile correctly and it’ll do the rest.

The before_integration lane is defined in the Fastfile file as shown below:

number_of_commits and cocoapods are Fastlane actions. Both Appfile and Fastfile files must be within a fastlane folder in the root directory of your project.

If we run fastlane before_integration, it will connect to iOS Member Center and download the profiles for the app indicated by its bundle id in the Appfile. Additionally, we have to send the password to fastlane. To make this work with Xcode bots, we pass it through the environment variable FASTLANE_PASSWORD:

Initially we attempted to use Keychain to pass the passwords to Fastlane sigh but it doesn’t work, for further info about this see here.

We will modify the deployer bot by adding a before trigger command on the Triggers tab, that will execute before_integration lane. 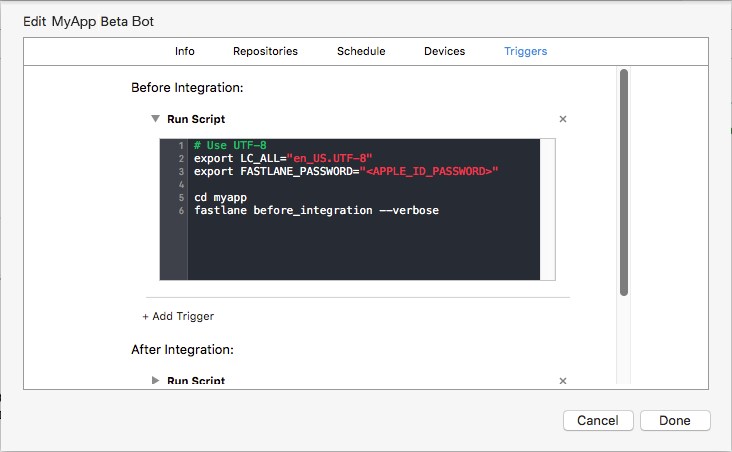 Note that before calling fastlane, we are moving to myapp folder which is the git remote repository name. Triggers run in the parent project folder.

After the bot finishes integrating the project, we will be able to access the created archive file, export it as an IPA file and upload it to iTunes Connect. We’re going to create an additional lane which be in charge of uploading the IPA to iTunes Connect and also creating a git tag.

Let’s start simple without taking care of the upload to iTunes Connect for now:

Now we are going to export the IPA from the archive file created by the bot during the integration. We do this by running the command xcrun xcodebuild in the after_integration lane. Additionally, we’re going to upload the IPA to iTunes Connect using Fastlane deliver tool. See details below:

We are not using the bot to create the IPA file because it is not available yet during trigger execution time. We are not using gym either because of the Keychain restriction problem.

Typically our projects have production and staging application targets. Fastfile file will require different lanes for each target that we want to upload to iTunes Connect. We need to modify the Appfile file to set up the correct app identifier depending on each lane:

Setting up apple_dev_portal_id and itunes_connect_id allows us to use different accounts for fetching profiles and uploading to iTunes Connect respectively.

Finally, after some refactor, the Fastfile file may looks like as shown below:

As the last step, add a new after integration trigger that executes our after_integration_staging lane:

During our process of setting up Xcode Server, we faced many drawbacks and issues that weren’t easy to solve, mainly because we couldn’t find any information on the web. We decided to make a comprehensive list so it can be help anyone in the same situation.

sigh will attempt to store the password in the keychain and try to access it later if no password is provided, but this doesn’t work when running sigh from a bot’s trigger since the triggers commands have no access to bot user’s keychain.

We tried by unlocking it before running sigh as shown below without luck:

We simply couldn’t access the keychain when running Fastlane. We opted to just save the password as a system environment variable.

CocoaPods is not able to update dependencies

NOTE: dependencies seems to be OK in Podfile, it might be a permissions error when pods try to update its repo folder in the user’s folder.

We ended up deleting CocoaPods and installing it as a described above:

That’s all, they cannot access to keychain. Seeing this message (or similar) when running gymor sigh is the symptom:

After updating Xcode to version 7.2.1 we were able to select it on Server app, then Xcode service was disabled. When we tried to select the correct Xcode app there was a dialog saying “You must agree to the terms of the xcode software license agreement” was shown. We found the solution on an Apple Forum thread Can not choose Xcode in Server App - “You must agree to the terms…”, running next command will allow you to select Xcode on Server app:

The IPA built by the bot is copied to this path after the build finishes:

But it’s not available at the time that bot’s after integration trigger is running.

The env variable XCS_ARCHIVE is defined only when the bot is set to perform the archive action.

To commit changelog changes and a build number bump we need to have access to the repo from _xcsbuildd’s shell. If you prefer use SSH to access the git server you will need to add a valid key in the builder user .ssh folder. Note that this key should not have a passphrase set. Otherwise, the trigger will ask you to enter the shh key password stopping its process until you enter it.

This will also be helpful to fetch git submodules.

Invalid Signature. A sealed resource is missing or invalid.

If the upload to iTunes Connect fails with an error similar to “Invalid Signature. A sealed resource is missing or invalid.”, it may happen because the export archive command (xcodebuild command) is not receiving the option -exportOptionsPlist. i it up and the path to the file is OK. The full error message is: