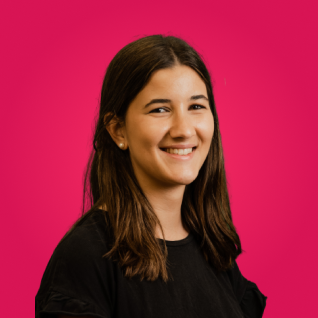 Building a Company Culture To Be Proud Of

All experience is subjective. However, many of the experiences that Xmartlabs’ women shared on March 8 tended to sound similar to one another. With no intention of being cliché, it is not for nothing that the movement that began in 2017 on the occasion of the abuses perpetrated by men in the film industry was dubbed “me too.”

And, if there were similar experiences within Xmartlabs, then probably, the same happened with women working in other companies within the industry. That’s why we decided to share the process Xmartlabs’ women began a little over a year ago in this blog post.

A process that strives towards a consolidated and formal network, with specific and achievable proposals to drive change within Xmartlabs. We also aim to be a reference point within the IT industry, other companies in the Uruguayan labor market, and, hopefully, companies from other regions.

We feel it’s essential to show the changes and objectives and why they must occur. Although the IT industry has made certain advances towards gender equality, we believe it wouldn’t be wise to risk stagnation because we’ve reached a relative “comfort.” 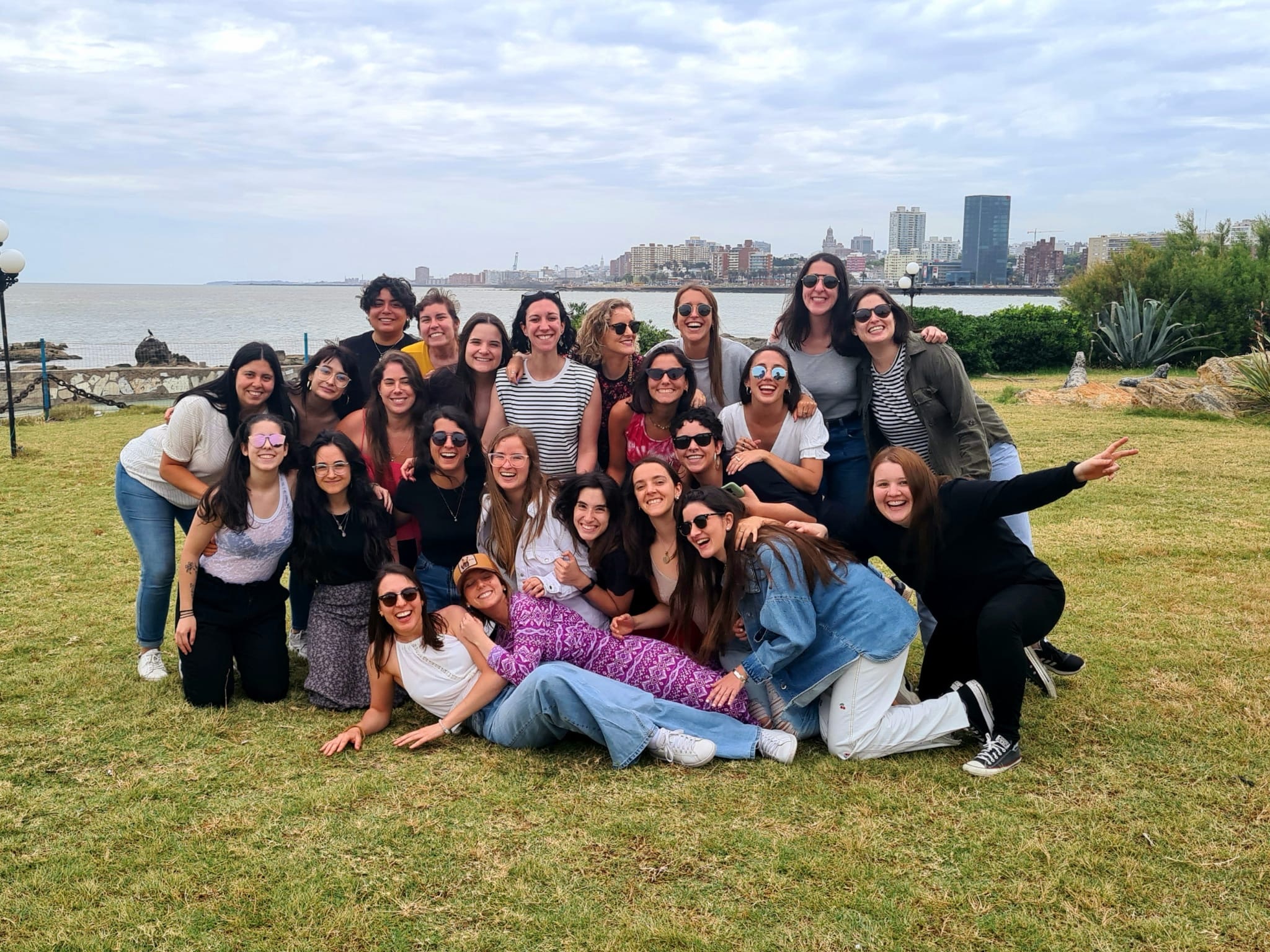 Background — IT industry in numbers

As I mentioned, there have been some constant, although slow, improvements in the IT industry regarding gender equality: 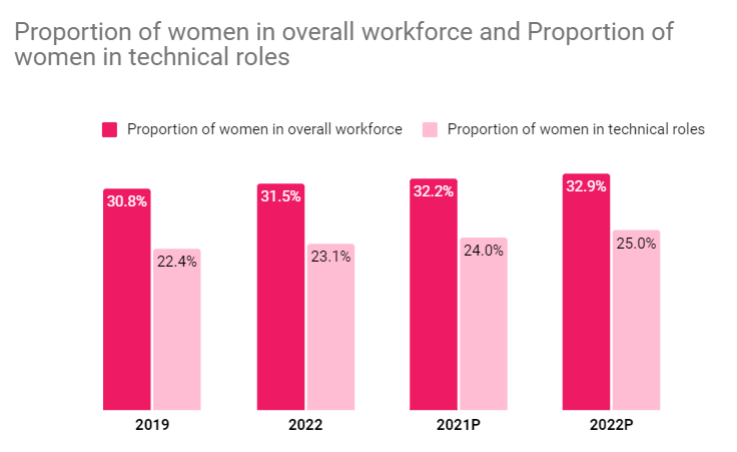 Source: Analysis and 2021 and 2022 predictions based on published diversity reports from 20 large technology companies (with an average of more than 100,000 employees). Deloitte

However, there’s still a lot of work to do. As shown below, women have continued to be disadvantaged in comparison to their male counterparts:

Although the talent search is an inherent problem in the IT industry, it should be noted that, compared to other sectors, it continues to lag behind in terms of female participation.

In 2021 there was a feeling among the women of the company that we still hadn’t managed to have a “standing” or a space of our own, specially in a work environment where the majority of the team and its leaders were men. On March 8, as a result of the commemoration of International Women’s Day, a cessation of daily activities was carried out. Instead, we decided to create a space where women could share their experiences in XL and their working lives overall.

After that first experience, we undertook specific actions. Some of them were: 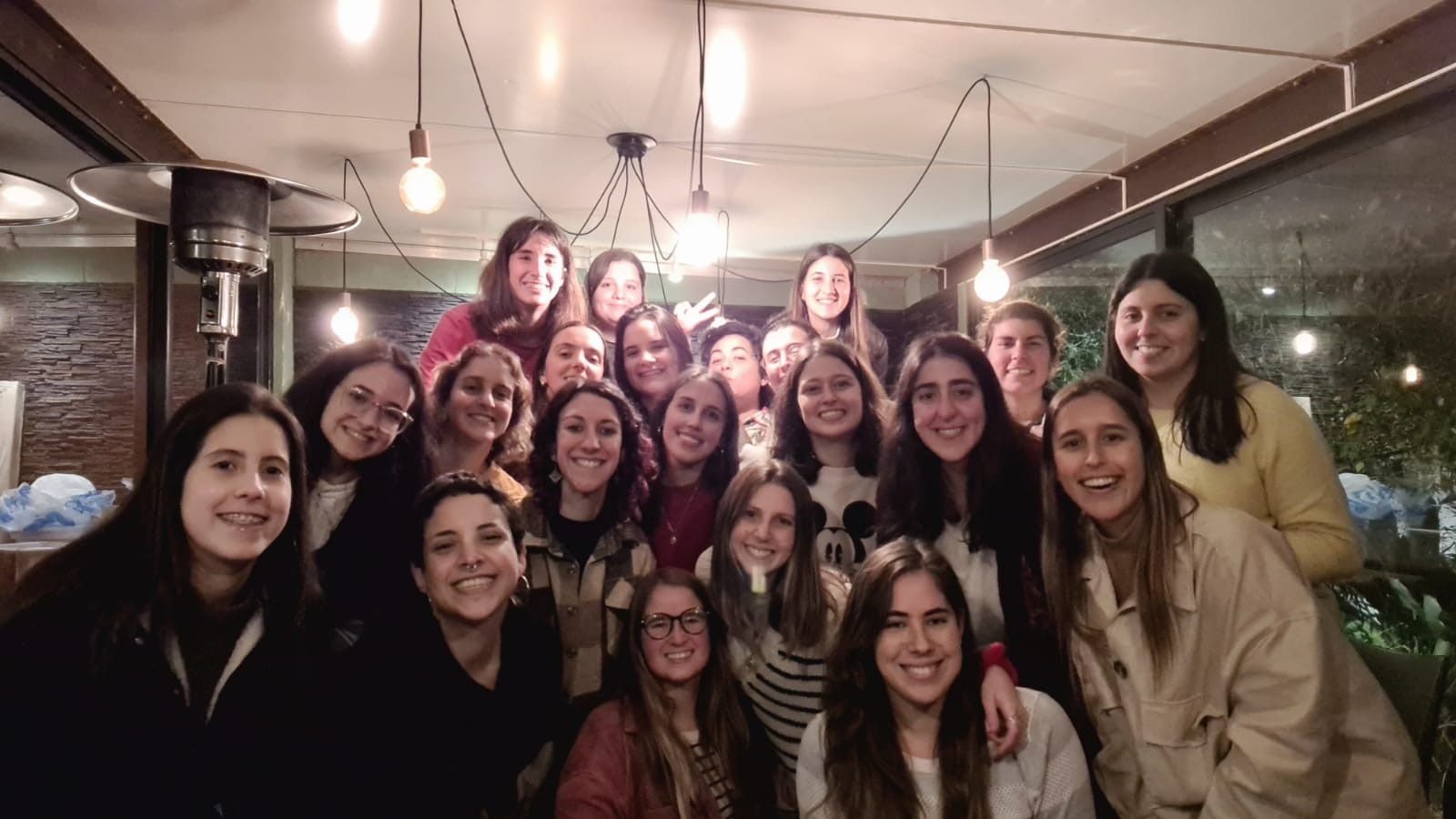 An after office for Xmartlabs’ women — September 2021.

When 2022’s March 8 was approaching, we had more specific ideas about what we wanted to do on that date. All women agreed to not work on their regular activities on that day and use it instead as a time for reflection, sharing, and planning.

We also needed to let the clients know about our plans for the day and have them on board with the idea. Explain why we weren’t going to work on our regular projects, what we were doing instead, and what we wanted to achieve. We sent a message to each and every project, and the replies we got were surprising (in a good way). Not only did we feel understood and supported by the clients, but they also showed a genuine interest in our concerns and proposals, going as far as suggesting roundtables and exchanges of both companies on the topic.

Every step of the way, Xmartlabs management also supported us and encouraged the activity. 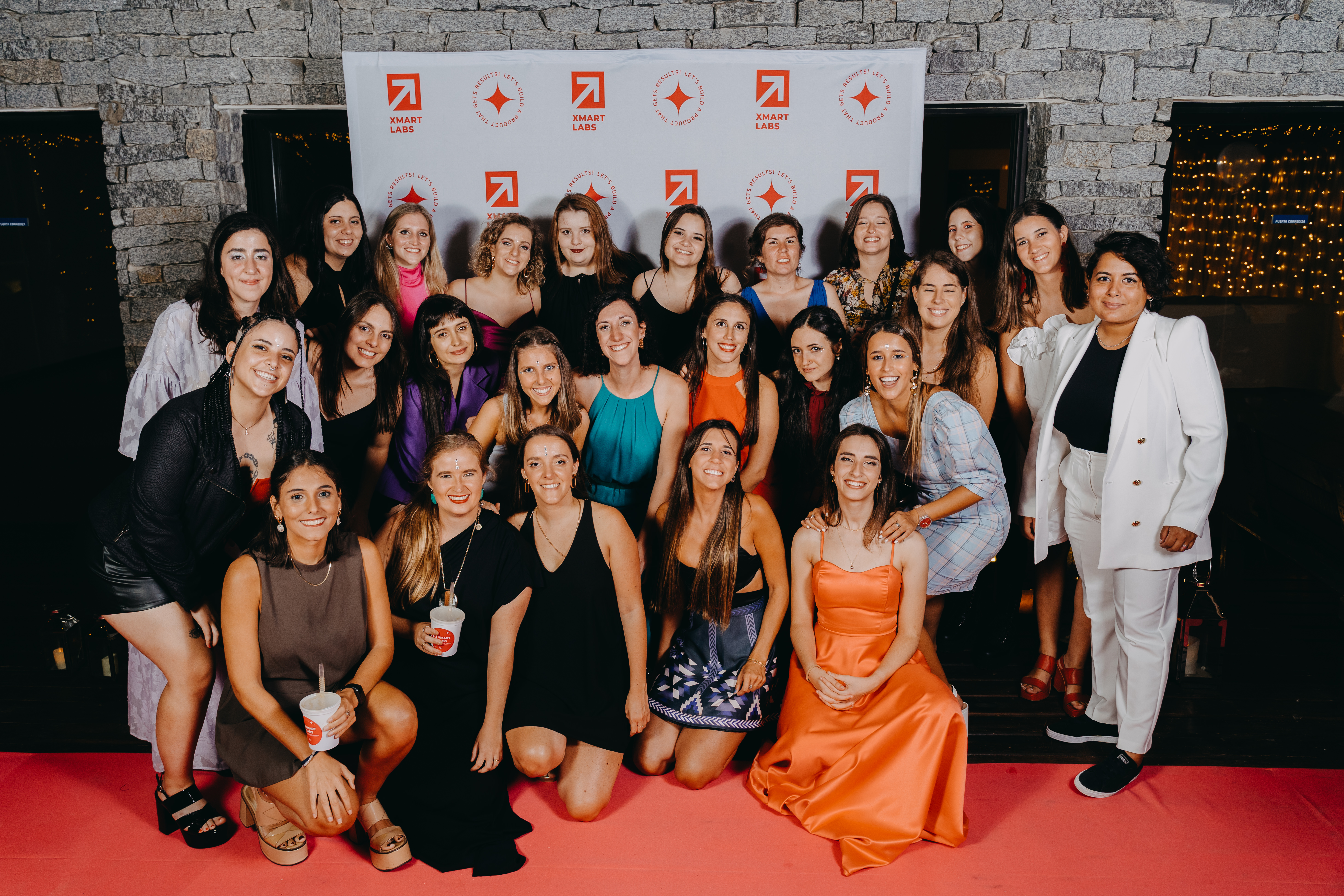 Just like last year, we had the opportunity to get to know each other. Some 21 women had joined XL since March 2021. So we had the chance for everyone to share their experience as a woman within the world of work and Xmartlabs in particular.

Besides personal introductions, some of the questions and topics we worked around were:

After sharing our stories and opinions with everyone, we started to think about how we could carry out specific actions to bring improvement opportunities. These would bring us closer to a more fair and healthy working environment. Some of them are detailed below: 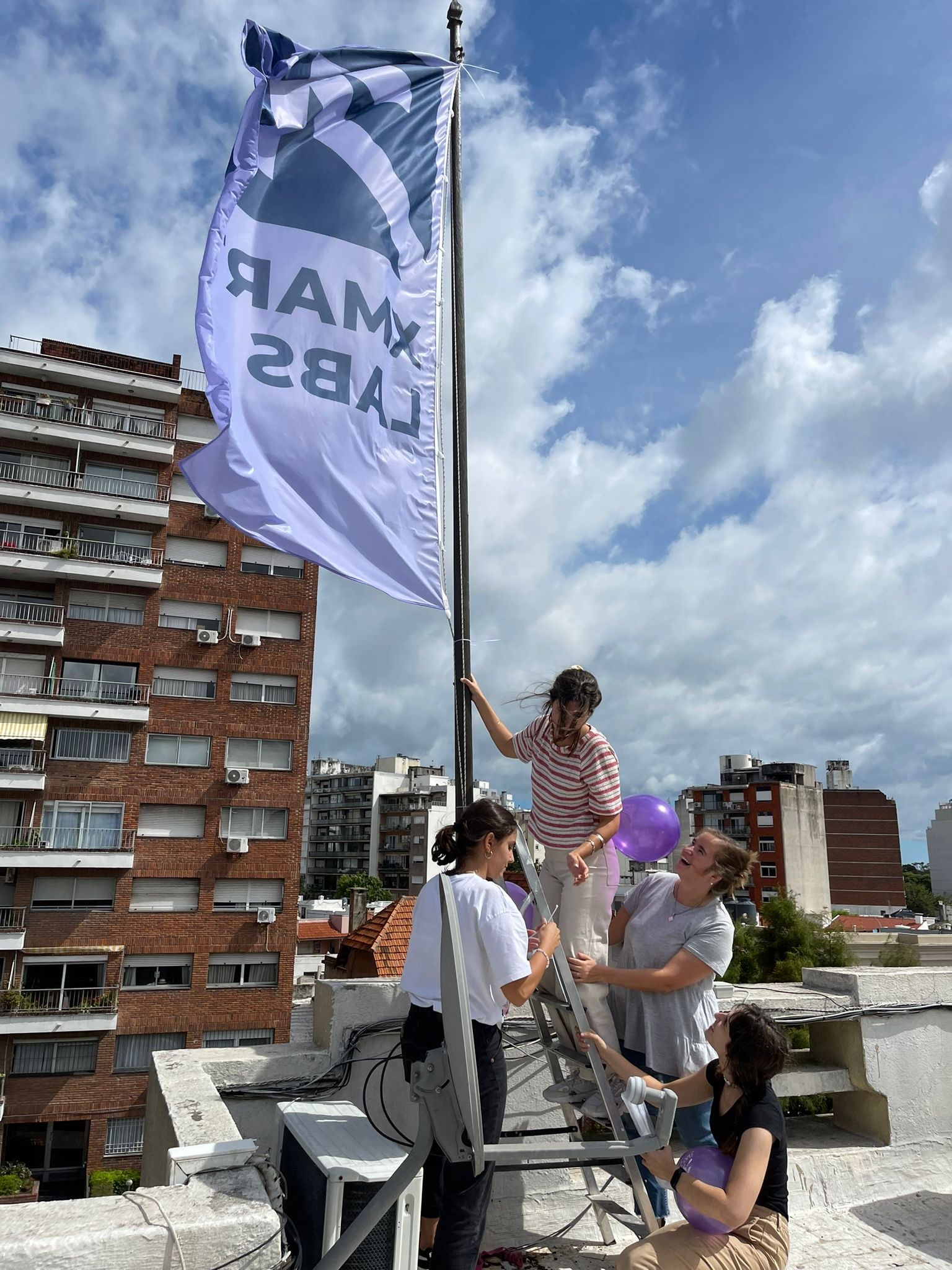 A purple flag waved over Xmartlabs’ offices during March, commemorating International Women’s Day on the 8th of that month.

Proposals that came up

Standardize the current regulations regarding maternity/paternity leave for those not in a dependency relationship.

The creation of a gender commission.

Oftentimes, daily situations of discrimination that women experience in the workspace are reduced to “personal” issues and are not elevated due to shame or fear. Taking it to HR, for example, means other people will find out about the issue because of what institutional procedures mandate. This causes many situations to go unreported and unnoticed.

To avoid the previous scenario, we believe the best course of action is to create a gender commission that operates outside Human Reouseces and handles these types of reports and situations so solutions can be reached without exposing those involved.

Additionally, having a gender commission is a requirement for companies participating in the Cuti Gender Commission.

Gender training for those in leadership roles.

Effective team management requires gender training to know how to deal with situations of discrimination, mansplaining, and harassment, among others.

Gender workshops focused on harassment for everyone in the company.

Although we held gender workshops in 2021, we believe that in many cases, harassment situations ensue because the people around them are not sure what constitutes harassment or how to respond to it.

The creation of a playbook that serves as a guide against harassment situations.

In line with the previous point, we believe it would be extremely useful to have a guide that helps people know how they should act if they find themselves in situations of harassment (either as victims or if they are witnessing it).

Standardization of the chaperoning process.

Every time a new woman joined the company, we tried to have at least one other woman pay attention to her, especially in her first weeks or months. Making sure she felt comfortable and at ease seemed essential to us, but it was done more intuitively. Now we want to achieve a formal process in which a woman is assigned to every new girl that joins XL so that there is a more constant follow-up without losing the spirit of camaraderie that we had when starting this.

Encouraging female participation in areas where it is not so common for them to be, such as DevOps or Machine Learning teams, feels important. We recognize that the gap is even more significant in these areas, and we consider it’s essential to promote the presence of women through training that enables them to be in roles within these areas.

After grounding the proposals and documenting them, the first step was to present them to the co-founders of Xmartlabs to discuss them and agree on them.

Once we did this, they were presented to the entire company during a lightning talk (quick half-hour talks that we do every Friday based on topics proposed by the team).

It seemed key to present these changes as something that should be a joint effort that we have to carry out as a team. The idea wasn’t to impose a series of demands but of changes, of challenges that we are facing together as a team.**

Beyond starting to work on the proposals that arose on March 8, which is the “natural” next step, we thought of other objectives that we are interested in pursuing. And it seemed key to us to weave networks with other women within the industry, taking advantage of existing spaces to spread our experience within Xmartlabs.

If this is a topic you’re interested in discussing, or you want to generate spaces to collaborate, both individually and in the company or field in which you work, do not hesitate to contact us. We are interested in continuing to grow, learn, and walk this path together :)